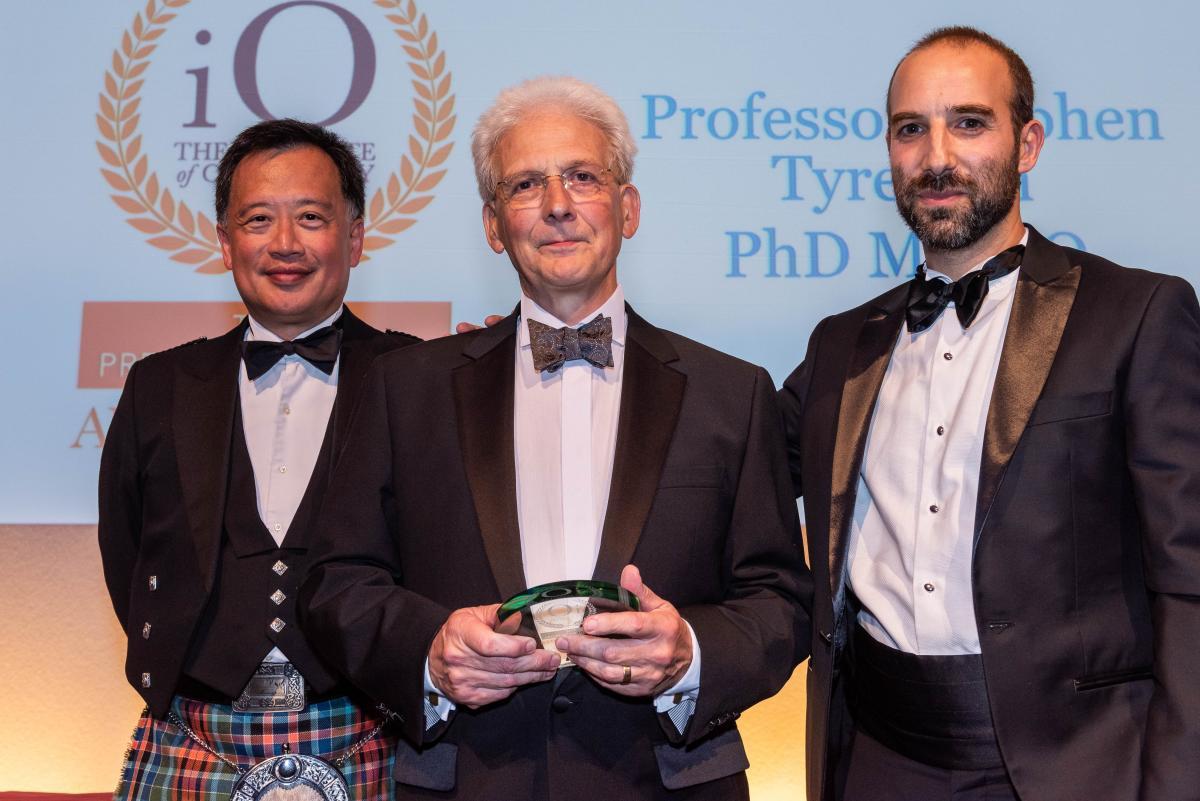 I write this obituary for Stephen knowing that he would, no doubt have written it better, produced fantastic accompanying PowerPoint slides and a complex but accurate mind map with the highest tech kit one could imagine.

Stephen Tyreman, friend and dear colleague died peacefully at home in Potterhanworth, Lincolnshire on the 19th of November 2018 aged 66. Stephen was the first child of Robert and Bobbie Tyreman and was born on the 14th of January 1952 in Grimsby. He went to school in Kidsgrove and Hatsfield and trained as an osteopath at the British School of Osteopathy in London which is now the University College of Osteopathy (UCO), graduating in 1974. Although Stephen was always a person to look to the future, he valued his early osteopathic training highly from osteopathic luminaries such as Shilton Webster-Jones, Clem Middleton, Audrey Smith, Betty Herbert, “Billlie” Naidoo, R. K. Hardy, Keith Blagrave. Colin Dove was a particular influence on Stephen and for whom Stephen went onto work for in Romford before setting up his own practice in 1976.

Stephen returned to the UCO as a lecturer in 1978 and fulfilled many roles over the years. Stephen’s areas of teaching included osteopathic principles, philosophy, ethics, technique and clinical tutoring. His clear and critical thinking soon became a mainstay of the institution. Stephen’s early work on osteopathic principles, with amongst others Clive Standen, soon led to a greater role in appraising and enhancing the osteopathic curriculum. He developed ideas drawn from system’s theory and holism into an applied and contextualised osteopathic approach. Stephen was instrumental in the thinking and theory that informed several iterations of the curriculum for osteopathic awards at the UCO. He consistently promoted contemporary thinking, critical reflective practice and the role of values in practice. As Course Leader he developed the innovative Batchelor in Osteopathy award in 2006 and was more recently Dean of Osteopathic Education, leading the curriculum review for the M.Ost. Stephen developed postgraduate Masters programmes for the University College of Osteopathy and then went onto to develop and lead the first Doctoral level programme in osteopathy in Europe which was approved in 2010. He was appointed Professor of Osteopathy and Philosophy by the University of Bedfordshire in 2006 and made professor at the Norwegian University College of Health Sciences, Oslo in 2011. He established and led the first International Conference on Osteopathic Education in 2005, which runs successfully to this day. Some do say that the highlight of this first conference was the sight of Stephen, travelling at speed down a hill at Royal Holloway in an office chair retrieved from a skip. Stephen was a wonderful colleague, ever willing to help others and to selflessly apply his mind to challenges facing UCO. He worked closely with Sharon Potter, Deputy Vice-Chancellor (Education) at UCO. Sharon and Stephen became friends as well as colleagues and Sharon and her family visited Stephen and Lesley in the wilds of Lincolnshire regularly. Stephen had a great affinity with children and when he stayed over in London with my family, he would willingly babysit. He would engage my boys with discussions about technology, school and sport. My eldest recalls these times with great affection, but when asked what he remembers most about Stephen. It was his voice. He had the gentlest voice.

Stephen completed a MA in the Philosophy of Healthcare at Swansea University in 1989 and this reinforced his interest in ethics and philosophy. He completed his PhD entitled “The concept of function in osteopathy and conventional medicine: a comparative study” in June 2001 with the Open University under the supervision of Professor Bill Fulford and Dr Michael Loughlin. Stephen valued his supervisors enormously. Stephen and Bill Fulford have been instrumental in working with the General Osteopathic Council on developing values-based regulation and ensuring that the appreciation of values runs through the current osteopathic curriculum at The University College of Osteopathy.

Stephen’s philosophical work has extended to the wider academic community and he has been an important contributor to The European Society for Philosophy, Medicine and Health Care which has been a source of new friends and colleagues. Stephen published widely in journals focussed on philosophy and health care and was a stalwart supporter of the International Journal of Osteopathic Medicine. Always willing to review, delivering seminal publications on osteopathy and guest editing a special issue on Osteopathic Education in 2013 with Dr Tyler Cymet from the American Association of Colleges of Osteopathic Medicine.

Stephen’s international collaboration was extensive, he contributed to the Osteopathic International Alliance meetings where in addition to his keynote, he would be seen sampling different beers at a variety of venues having been led astray by UCO’s very own Vice Chancellor, Charles Hunt. He was an invited speaker at numerous international conferences. He was a collaborator with the CauseHealth programme exploring causation, complexity and evidence in health sciences. As a mark of their esteem for Stephen, they plan to hold their final event in Stephen’s memory. He was recently awarded the President’s Gold Medal by the Institute of Osteopathy for his contribution to the profession. Stephen has also been awarded an Honorary Fellowship by the University College of Osteopathy. Sadly, he died before he was able to receive the award, but took the time to write an eloquent acceptance speech for the ceremony.

Stephen’s work was underpinned by exploring uncertainty as the proper epistemological basis for healthcare practice and developing an ecological narrative of healthcare. He was dedicated to person centred care and a passionate advocate of osteopathy. He championed curiosity and critical reflection. Typical of Stephen on our last meeting, for fear of being overheard and causing offense, he quietly told me that alongside the sadness of his illness, the impact on his family and imminent death, he had found it immensely interesting being ill and experiencing the changes in himself and the interactions with his care team for which he was most grateful. He was at peace with his cancer. He embraced the situation with elegant dignity and refused to expend his energy fighting the disease.

His most recent publication was a moving and insightful editorial in the International Journal of Osteopathic medicine entitled “Evidence, alternative facts and narrative: A personal reflection on person-centred care and the role of stories in healthcare.” Stephen grappled with his own experience of illness and healthcare to enable others to reflect on their own practice. He ended with the following:

“To be person-centred in healthcare is to recognise that although we know that such things as eating healthily, exercising, getting sufficient sleep and so on, are good for us, we can find them almost impossible to achieve when the world around us, the world that provides the meaning-structure for our lives, demonstrates and offers something else that is easier, comforting and unchallenging. Pain, illness, disease and impending death are some of the greatest challenges we each face…….. we cannot ignore, avoid or defer those challenges; they force themselves on us. The practitioner's task is not merely to explain and treat, but to provide support and insight into the meaning of illness experiences in order to enable a patient to develop a better, life-enhancing narrative and become a more whole person.”

Developing a better, life-enhancing narrative and becoming a more whole person mattered to Stephen and he personified these values in his life. Although an internationally respected academic in his field, perhaps Stephen is most regarded by the osteopathic community for his kind, gentle and thoughtful approach to teaching. He has brought forth the best in many osteopaths, who are grateful for his insight, original thinking, mentorship and quiet leadership. To his patients, he was a source of ease and insight.

Stephen’s work was important to him, but somehow, he found time for other activities that he valued. He was a fantastic photographer, loved music and cooking as well as enjoying motorbikes and fast cars. Stephen took pleasure in watching films and rugby and enjoyed the internationals that took place towards the end of his life. However, his family mattered most. Stephen married Lesley on 27th of July 1974 at Eastcote Methodist Church, London and was married by his father. Stephen and Lesley’s children Philip and Anna were a constant source of pride and joy to Stephen. He very much loved his grandchildren, Alfie, Sam, Edie, Tabby and Charlie and took enormous pleasure in seeing them grow and learn. He expressed deep regret that his illness meant leaving Lesley early and not being able to enjoy seeing Philip and Anna continue to develop their lives and nurturing his beloved grandchildren.

Stephen was surprised by the number of people who contacted him when they heard that he was so ill. Over several weeks, he began to realise how much he had meant to so many people and that he had made a difference. He was very keen that his work should continue. He took some comfort in knowing that a group of colleagues plan to carry his work forward with the Stephen Tyreman legacy working group. He was very pleased that his daughter Anna wanted to be involved and made it clear that those involved should let Lesley know of any productive work that flourishes from his legacy.

Stephen’s funeral will be held on Monday 3rd December at 2.00 p.m. in Lincoln Central Methodist Church, followed by a short service for close family only at Lincoln Crematorium. The address of the Church is 123 High Street, Lincoln, LN5 7PR.

The family will return to the Church after the Crematorium and would be pleased to see you on their return. Refreshments will be provided by the kind members of Central Methodist Church.

Parking around the Church is extremely limited, however, there are a number of public pay car parks nearby. It is recommended you allow plenty of time.

There is no particular dress code and Stephen’s family have decided on family flowers only.

As most of Stephen’s professional life was dedicated to Osteopathy and its advancement we ask that instead of flowers you make a donation to University College of Osteopathy, via the funeral directors, Lincolnshire Co-op Funeral Directors, Tritton Road, Lincoln, LN6 7QY.

The University College of Osteopathy have also arranged a JustGiving page for The Stephen Tyreman Legacy Fund: http://bit.ly/StephenTyremanLegacyFund

Stephen positively influenced my life and many others in so numerous ways. He leaves a huge gap for all of us and we will miss him deeply.