– An article by Annie Hallett, speaker at the 'Palliative Care for Manual Therapists Conference' at the UCO on 18 May 2019 –

These few words were said to me once by the daughter of a patient. It was shortly after her father had received therapeutic touch, which is a practice generally thought of as belonging to part of the spectrum upon which that strange and ancient phenomenon to which, in the West, we give the name “healing”.

The word healing itself is actually derived from an Anglo Saxon root which means to make whole and in the context of therapeutic touch this does not imply curing. As one patient put it after receiving thearapeutic touch:

The term therapeutic touch was coined back in the early 1970s when an American Professor of Nursing, Dolores Krieger, recognised the potential within the broad spectrum of traditional healing to make a contribution to the work of nurses. She wanted a title which was devoid of any particular belief system. In fact, she thought that this art was actually a natural human potential – something we can all access – and it is now taught not only to nurses but to anyone with a genuine interest in helping others.

At its very heart, therapeutic touch is a way of communicating compassion, using the hands and the intention as a focus, which at the end of life and during palliative care transforms a therapy from a mere mechanical task to one which is truly holistic.

I can still see, in my mind’s eye, the woman who spoke those words to me – she was sitting on a chair on one side of a hospital bed, a few feet away from the bed itself. I was standing on the other side of the bed and her father was lying on the bed, with just a sheet over him as he was feeling quite warm. He was semi-dosing and quite drowsy but knew I was there and we held hands briefly.

He was in the last few days of his life and had asked me to go over to our local hospice where he was an inpatient, to see him.

At the time I was working as a counsellor and complementary therapies nurse in our local hospital and John had been a patient of mine for some months and also a long standing haematology patient. He had been coming to see me partly for counselling and also for a mixture of very gentle shoulder massage with essential oils and of course therapeutic touch. In the end, we just used therapeutic touch as its simplicity was enough.

John was a big “man's man” in his early fifties, but really in his heart he was just a gentle giant. His disease had eventually caught up with him and he had been in the hospice for a few days and knew he was dying. He was nobody's fool. He seemed to have come to terms with this in his own way and it felt as though he was, to some degree, ready to let go of what had been a gruelling few years, knowing now that there was no longer hope for life. That is not to say he was not reluctant and terribly sad to give up his life and leave behind those he cared about or that it had been an easy journey to get to this point.

I had never met his daughter before and, being mindful not to intrude into her pain and the space she was in, unless invited, I just passed a few words with her, introducing myself and checking she was happy for me to continue.

I centred myself and focused my awareness on John, with my intention being simply to help in whatever way was right for John at that moment in time. I then started to practice therapeutic touch, or at least opened myself to the process we call therapeutic touch. To visualise therapeutic touch, simply imagine my hands at a few inches distance from John's body, moving slowly in a downwards movement, starting from the head area. Within this process one may notice different patterns of energy, different sensations; and there are ways of working with these, but the most important aspect is simply to let the hands move gently with the intention focused and guided by compassion.

Coming to a close, I looked up from John who was lying on his bed, by now looking more rested and seemingly asleep, certainly with his eyes gently but definitely closed.

I looked across the room towards his daughter. I was amazed at what I saw. The change in her expression was unbelievable – it was as though the worry and angst in her face had left and had been replaced by an incredible smoothness. Her eyes were distant but equally acutely present and bright. It was then that she looked at me and said, quite simply: 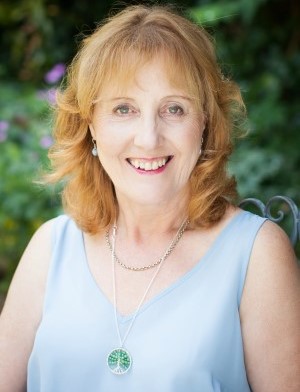 Annie has a background in nursing, counselling, education and complementary therapies including healing. In 1993 she started one of the first Counselling and Complementary Therapy services within an NHS Cancer Unit in the UK, which is when she became interested in healing and therapeutic touch. She studied various traditions of healing, shamanism and reiki, but it is the interpretation of energy and healing through therapeutic touch which has had the most influence on her work. She studied therapeutic touch with its founder Dolores Krieger, both in Australia and in the United States and with Jean Sayre Adams who first introduced it to the UK. In addition to counselling and complementary therapies, her work in the NHS has included strategic roles along with bereavement support and the teaching of communication skills. She has been involved in the development of various guidelines relating to counselling and complementary therapies nation-wide, and has run numerous workshops across the UK. She is CNHC registered and serves in an advisory capacity on their Professions Specific Board for Healing. She is the author of ‘A Far Reaching Thing, Tales of Healing with Therapeutic Touch.’

Annie Hallett will be speaking about therapeutic touch at the 'Palliative Care for Manual Therapists Conference' at the UCO on Saturday 18 May 2019. Find out more and book your place.

Did you know? The UCO offers a one-year Postgraduate Certificate in the Integrated Care of Older Adults. Find out more and apply.