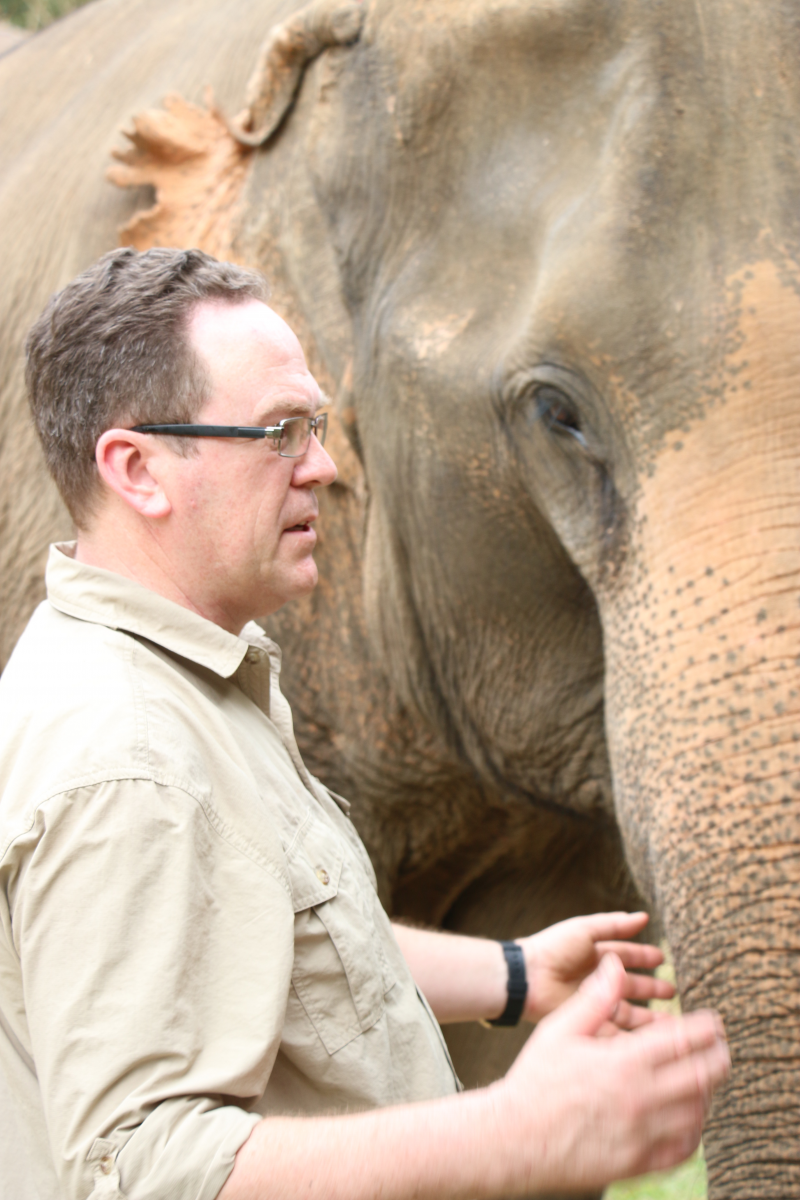 I still get a buzz from planning and preparing these workshops. No two are ever exactly the same. I see them as modern-day adventures where it is still possible to get the old adrenalin pumping, far removed from the suffocating restrictions placed on us at home.

I love sorting out the kit needed to ensure that everything needed is catered for. Only when the plane actually leaves the ground do I actually relax in the knowledge that for the next few days I won’t be clock watching, or having to talk about the weather to successive patients. 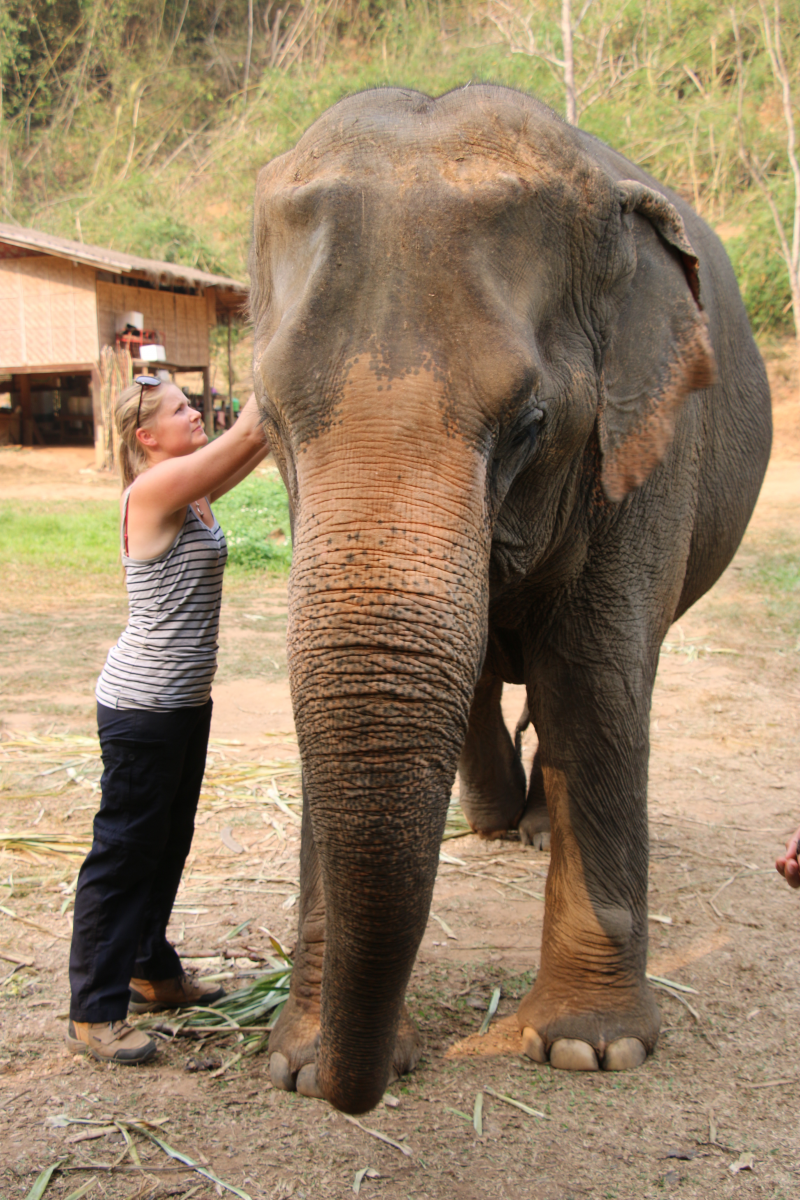 No all of that will be replaced with the utter joy of watching a select party of fellow professionals introduced to my amazing world of elephant osteopathy. These magnificent creatures having far more in common with us than one might imagine. They are long-lived, form close family groups, have very inquisitive minds, can problem solve, and work as a team, and they also suffer the myriad health problems we do.

Add to this the fact that in their range states (where they are naturally found), elephants are either controlled or hunted and sometimes both. Therefore it is common to find elephants with both physical and emotional problems, again not unlike humans!

My interest in treating these, and the many other species, arose from a desire to test the limits of osteopathic principles, whilst playing a small part in conservation. By focusing on certain species it is possible to have beneficial effects to many others. Elephants are apex species, those that shape and control their environments. By helping these, and others like the great apes, and cetaceans can help safeguard countless others.

When I talk to people about the elephant workshop I often get asked why I don’t run them in the UK. The simple answer to this is that we have a total of around 60 elephants of all species in the UK and they are spread thinly. There is also the monumental barrier of health and safety, such that no UK collection would want to countenance a group of professionals with zero elephant experience being allowed anywhere near their charges. 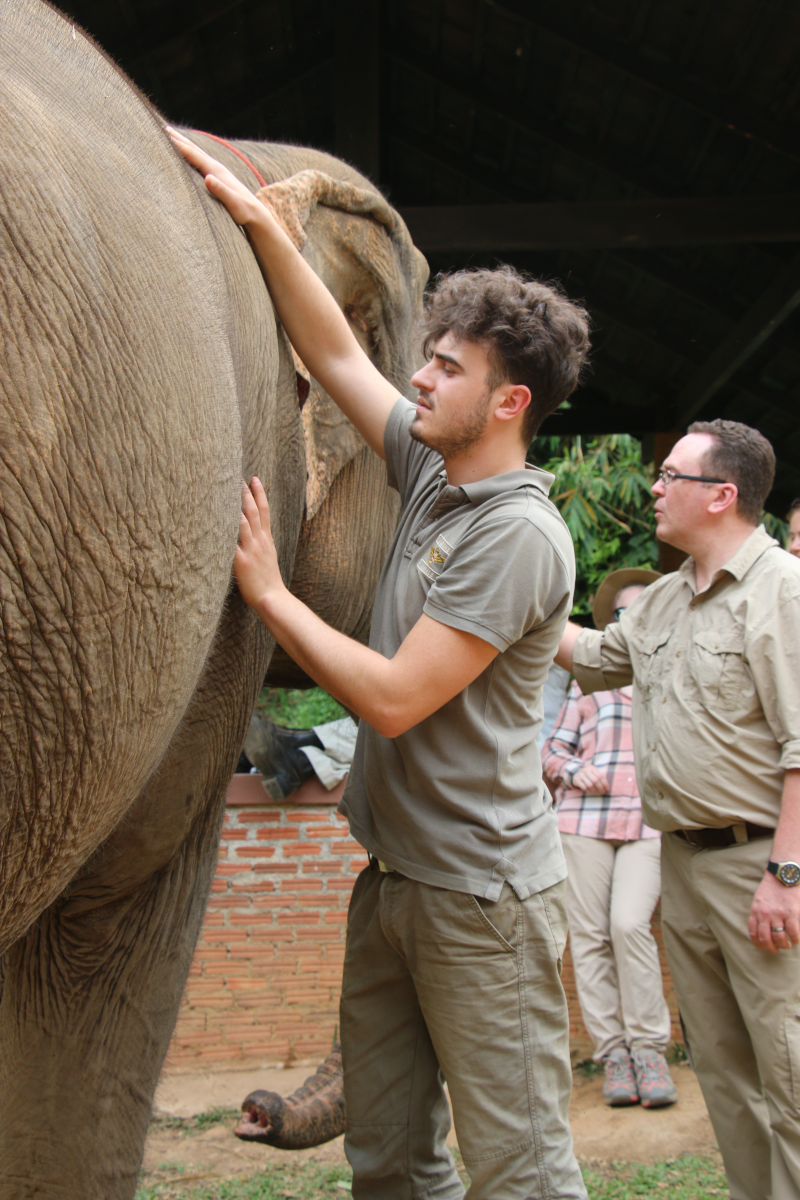 The next question I always get asked is when is the next one in Chiang Mai? This is a beautiful medieval city in northern Thailand where there are a couple of elephant centres. It is not where I run my workshops. I have based them at the Golden Triangle Asian Elephant Foundation and Camp (GTAEF) because they are the only organisation I have found that is actually trying to create long term solutions to keeping and looking after the roughly 3000 legally owned elephants in the country. Because they are long-lived, and because their natural industry ceased (logging), sustainable and ethical alternatives have been sought to ensure these intelligent, yet dependant animals have a future. At the same time, the foundation is striving to educate the elephant owners (mahout’s) families so that the next generation have choices about careers, and don’t have to follow tradition. The foundation is also heavily involved in conservation measures for Thailand’s wild populations of elephants and often liaises with neighbouring countries on this matter.

The foundation is licenced to look after up to 30 elephants and is set in native teak forest and borders the mighty Mekong River as well as Myanmar and Laos. GTAEF do not buy or own elephants. They lease them and employ the mahouts to look after them, and provide tourists with the ability to get up close to these incredible creatures. By creating employment they take away the problem often encountered where well meaning people buy an elephant to “rescue” it, only to find the mahout uses the money to buy two more! 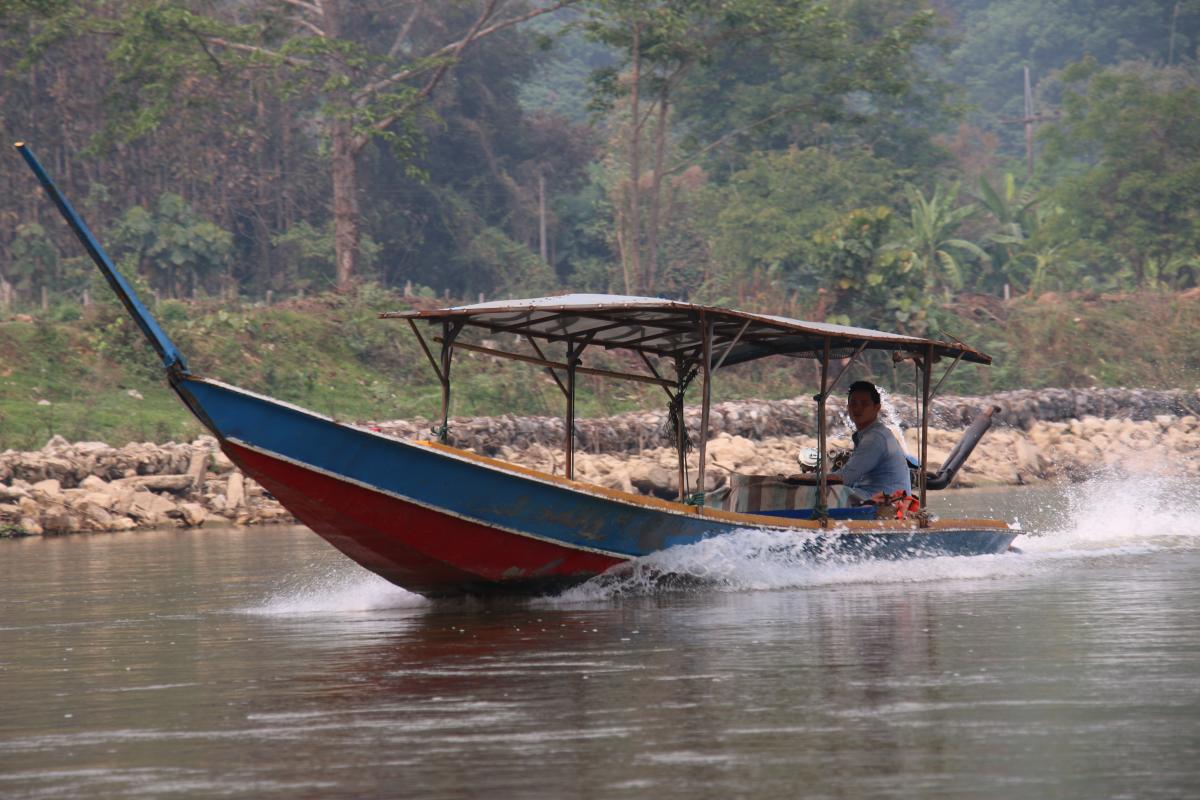 The foundation also provides full time veterinary staff, and over the years has welcomed me in to provide and help introduce the concepts of osteopathy. For my part I have been treating elephants for around 27 years, and something that was once ridiculed is now being seen as almost mainstream.

The concept of running these workshops dates back to me wanting other osteopaths to have the opportunity to smash through the glass ceiling of our profession and reinvigorate the pioneering traits that created osteopathy in the first place.

The fact that I use elephants is to really pull delegates from their comfort zones. The individuals at the foundation have genuine health and mental issues so provide a means for each group to focus and identify with them.

Day one is always a magical time, seeing the expressions on the faces of the delegates when it dawns on them just how awe-inspiring it is to be around elephants, and not just viewing them from the other side of a safety barrier.

Safety is paramount, and I am always on guard, along with GTAEF staff to ensure everyone’s safety. So far we have all been OK!

The workshop is based around a five-day schedule. Day one gets delegates looking at how elephants are muscles, how they move, and obvious signs of locomotor problems. We film the elephants moving before anyone touches them. The delegates then palpate their first elephants. This is a joy to behold as they suddenly realise just how much you can feel.

Day two takes this further with treatments beginning. Also, the elephants start to express through body language which delegates they prefer working with. By the end of day two delegates are pretty wired. For this reason day three involves a boat trip (in fast long tailed boats up a tributary of the Mekong) to see slightly less fortunate elephants, and then a grounding afternoon at a famous Buddhist temple, then it’s back to the hotel.

The hotel is to die for. Set in the cliff face overlooking natural flood plains, and boasting one of the best views from an infinity pool, it is a hidden gem. Through an incredibly generous

deal with the hotel owners and staff we get to stay there at very affordable rates, but only because of the hard work put in with treating the elephants.

Day four sees us all watching elephants move, palpating and then treating them. It is usually on this day that I have to remind people that they are not like horses and that you never lower your guard around an elephant. 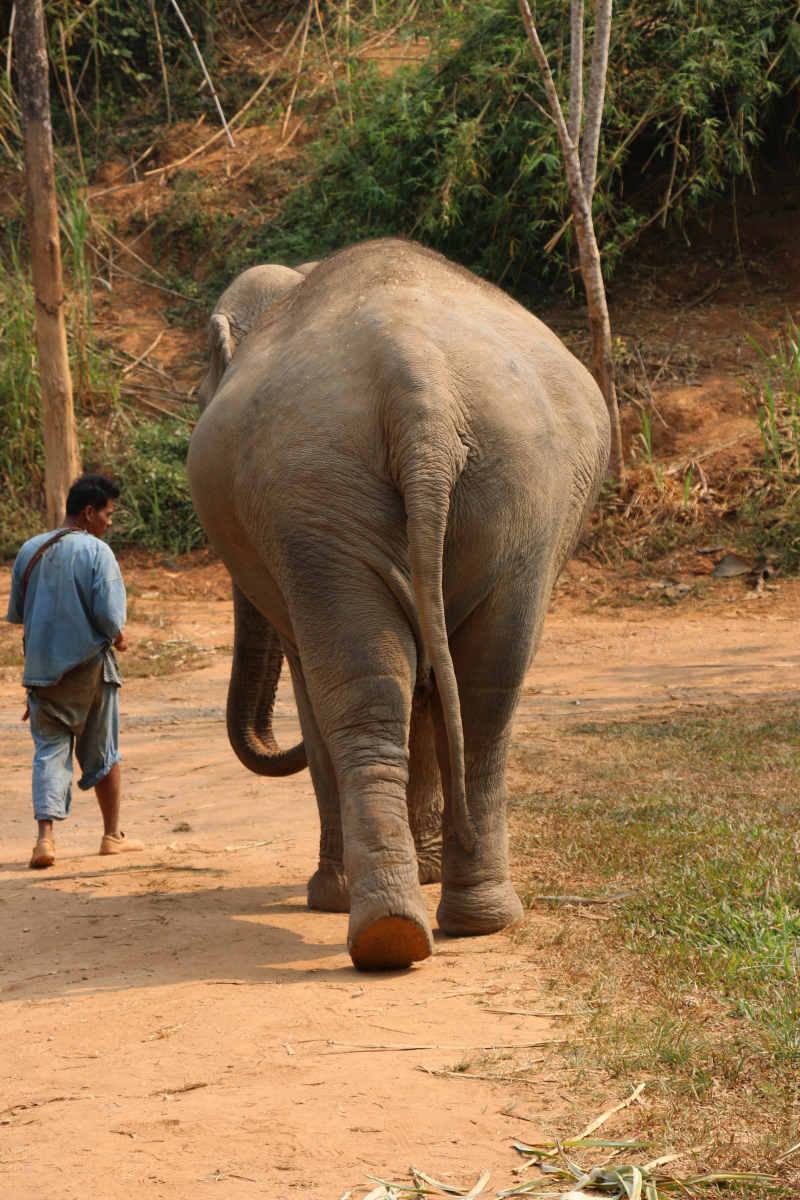 Day five sees the group do final assessments of their elephants, palpate, treat, and then we film them moving to compare with footage taken on day one. After lunch, we view the footage to compare and do a round-up of tasks and objectives achieved during the week. After this, the group go and explore the opium museum nearby to learn about the grizzly history of the region. Then we reconvene for a gala evening meal and share stories and experiences.

The change in people throughout the week is enormous and one of the best experiences I get to see. Some of them are so enthralled that they return time and again, as no two workshops are ever the same. The chance to see and experience real changes in patients weighing 3 or more tonnes is incredible.

As an aside, the area is rich in bird and insect life, as well as a few reptiles. The chances to see these are yet another reason to visit the region. Don’t just take my word for it, check out articles by a couple of our recent delegates Emily King, featured in Animal Therapy Magazine issue 16, and Samantha Scargill’s article on the International Association of Animal Therapists website.

Better still, why not join us on the next one. You get 30 hours of CPD as well!